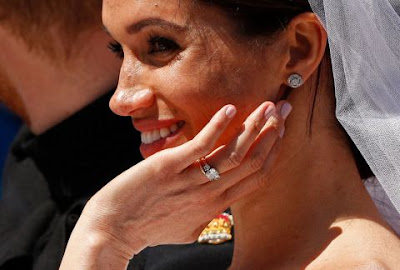 Meghan Markle has to face a lot of new rules now she’s married into the royal family. No more social media. No selfies. No getting involved in politics. And, of course, no more dark nail polish.

It’s a little thing, but much like the rule that declares Prince George must wear shorts until a certain age, it’s the kind of thing that we imagine could niggle.

At all public appearances for the royal family, only natural-looking nails are permitted – meaning no dark polish, no massive fake talons, and no trendy nail art (sad times).

Unnatural nails and dark polish is considered ‘vulgar’ by the Queen, so it’s a pretty big no-no.

The Queen is known to love Essie’s Ballet Slippers shade, having worn only that shade since 1989.

Back in 1989, the Queen’s hairdresser sent Essie a letter requesting bottles of Ballet Slippers, as the £7.99 polish is the only one she’ll wear.

As a result of this rule, you won’t have seen Kate Middleton rocking any nail colours other than a neutral, sheer pink since she married Prince William – and now you’ll see the same on the hands of Meghan Markle.

While Meghan has broken traditional style rules with her preference for messy buns, it looks like the nail polish rule is one she’ll follow. Meghan has only been pictured wearing light pink polish since the announcement of her engagement back in November 20
Gist Gossip